I've finally gotten my backside in gear and started my Christmas preparations prompted by the thought of visitors we weren't expecting over the Xmas period. From just the 4 of us (myself, DH and 2 adult sons) there will now be at least an extra 2 and possibly 4 here for the holiday, with 2 of them staying over for a couple of nights. With our 2 puppies currently needing so much attention, I really can't be bothered making everything from scratch so today I've emptied my sealed savings tins and have done an online Iceland shop to be delivered later this week.

I've also done most of my gift shopping online, and I'm sending shop-bought cards this year, purchased for a few pence in sales throughout the year, instead of making them all myself which I did last year.

I was surprised that there was £130 in my tins since I don't seem to have put anything much in them for the past few months. That will certainly pay for all the food and the 2 hampers of Kentish produce I've ordered for my daughters and their spouses who now live in other parts of the country.

Apart from buying the pups, who were paid for from DH's redundancy money, we've had a lot of unexpected expenses over the past few weeks. £400 spent on repairs to the car, a waste of money as it's still causing issues that can't seem to be solved so we're probably getting rid of it now. £120 on tickets, hire of robes and photos for DS2's graduation ceremony at the end of January, and £200 on Friday for new bath and sink taps and other plumbing work resulting from a leak that dripped through the kitchen ceiling right around the light fitting. I had to dip into some of my special occasions and holiday savings that I was going to use for Xmas and so the remainder of my Xmas spending will now be funded by the money I usually use to overpay on the mortgage each month. It won't hurt to have a month or two where I only make the basic payment. I'm so thankful that I had savings to draw on and won't start the new year with a credit card bill I can't clear completely. As soon as it's all paid off I'll be cutting back again to replace those savings.

Speaking of the pups, they've settled in extremely well, house training is hit and miss at the moment, but they are peeing and pooing in the right place more frequently now. The cats are still staying very distant, and they are the ones keeping us awake at night now they're allowed to wander the upstairs while the pups are shut in the living room.

How are your preparations going? Are you all done or leaving everything until the last minute?

A Tale of 2 Puppies

Yesterday I went out intending to collect one little girl puppy...so how come I'm sitting here watching 2 little boy puppies gnawing on their chews on the rug?

It's DH's fault. There was only one girl left from the litter and I was all set to take her home when DH says...how about we have 2 so they keep each other company, like our 2 cats do? I didn't jump at the suggestion straight away, quickly mulling over the pros and cons (and dismissing all the cons, of course), especially double the purchase price and vets bills, and insurance. When I'd more or less decided 'yes', I had to choose between the 3 boys? And then I considered what having a girl and a boy would mean before they were old enough to be neutered and the faint possibility we wouldn't catch them soon enough and end up with an unwanted pregnancy. In the end we decided to play it safe and take the one tan-coloured boy which left me to decide between 2 black and white boys. Choosing between them was so hard but I really, really, really couldn't take all 3 boys so I let DH make the final decision.

And that's how we've ended up with Ollie (tan) and Charlie (black and white) who are 10 weeks old Shih Tzu cross Toy Poodles. 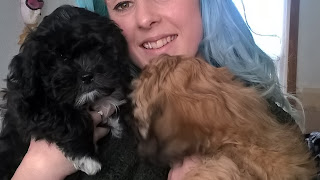 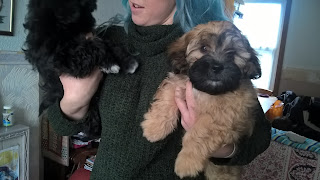 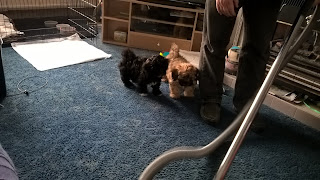 Helping Dad with The Hoovering

Our two cats have had their world turned upside down and have been making themselves scarce upstairs for most of the time. I'm feeling guilty about that as my Shadow was particuarly affectionate and is currently keeping his distance. I'm really hoping both he and Halo will soon accept the pups and get back to their usual selves.
Apologies if the gaps between pictures aren't equal; they look okay when composing the post but are out in the preview.
Really, really cold here today. The first day this year I've needed hat, scarf and gloves when going out. I've just splashed out and bought a couple of cheap room heaters for the boys bedrooms so I don't have to have the central heating on too much. This is a cold house and despite plenty of insulation in the roof, the top bedrooms are particularly chilly. I don't like spending money on electricity and gas but we need to keep warm and extra layers of clothing aren't doing it completely right now. I hope you're all managing to keep warm.
Posted by Heleng at 19:14 7 comments:

War on Waste and Cats and Boxes

Having watched my Tivo recording of Hugh's War on Waste last night I resolved this morning to use up some of the veg I have in the fridge and vegetable basket. And it's not only my fridge but also the freezer and cupboards that have all kinds of odds and ends lurking and forgotten.

So this morning I have made curried parsnip and carrot soup, cheddar and wholegrain mustard bread, a vegetable curry and crumble-topped raspberry muffins.

The carrots and parsnips for the soup were just starting to go wrinkly in the veg basket. The veg curry contains more of the carrots and parsnips, some celery and cherry tomatoes from the bottom of the fridge and a part-packet of curry spice mix that had been hiding at the back of my cupboard for ages. I also tossed in a tin of Pinto beans I'd had on the shelf for a couple of months.

The bread used wholemeal flour that had also been around for a while, white bread flour, wholegrain mustard from a huge tub I bought from Approved Foods ages ago, a sachet of dried yeast that was due to go out of date this month and half a pack of Aldi grated cheddar.

The muffins used Lurpack butter I bought reduced in M & S of all places and had in the freezer for a few months, and frozen raspberries from FarmFoods that I'd also had for a while and forgotten about. They will be served with custard for dessert tonight and tomorrow.

The soup and bread are for tonight's dinner, and the curry will be served tomorrow with long grain rice. Two day's worth of dinners and desserts made entirely from foods I already had in the house, some that other people might have thrown away for not looking nice or being out of date.

I do love my kitchen gadgets though. The curry is currently being cooked in my slow cooker, the soup made in my new soupmaker and I used my breadmaker for the loaf but browned the cheesy top in the oven while the muffins were baking. I could have saved money on fuel by mixing and kneading the bread by hand and baking it in with the muffins but my wrists aren't as strong as they used to be... No, that's just an excuse, truthfully, I hate kneading dough and I'm lazy so I stuck it all my ancient breadmaker but the top wasn't brown enough so it went in the oven for that final browning.

Here are the pics of my hard work - 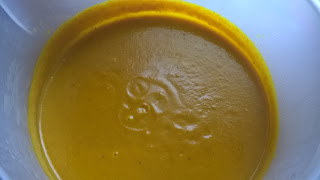 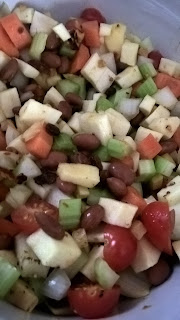 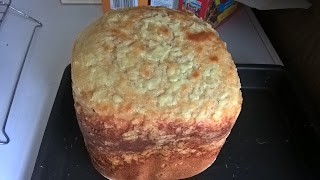 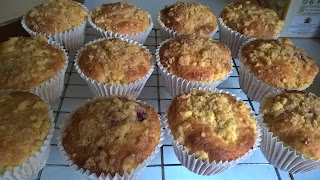 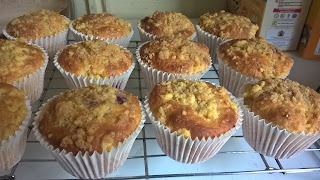 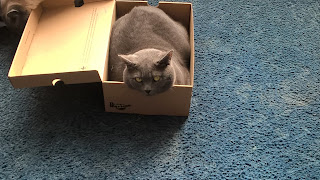 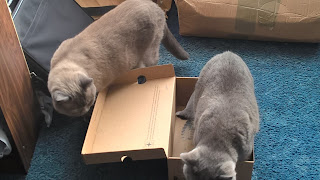 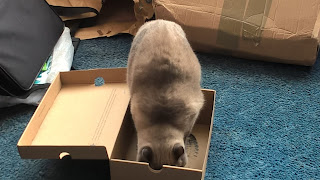 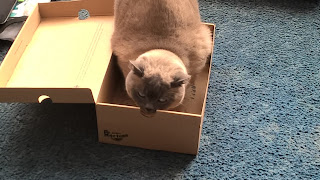 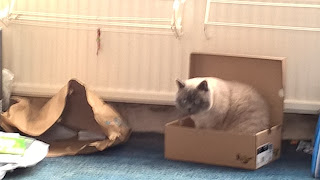 I think Halo won that time.
Despite the forecast it's dry here today so I'm just off into town for a coffee with DS1. Hope it's not too wet and wondy where you are. Love Helen x 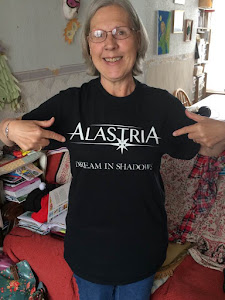 Frugal wife to my lovely hubby of 32 years, Mum to 5 adult children plus 2 cats. Writer. Crafter - knitting, sewing, patchwork, cross stitch, card making. Collector of WW2 Homefront Memorabilia. Lover of vintage crafts and household items, especially soft furnishings and kitchenalia. Baker. Walker. Slimmer - After a lifetime of struggling with my weight I have maintained 5st lost with Slimming World for over 2 years.